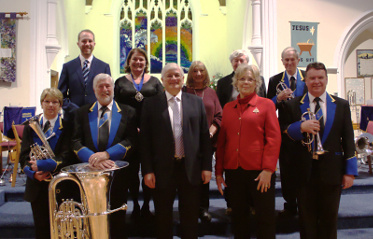 At our annual Christmas concert on Saturday, Godalming Band came on stage for the very first time in their brand new set of jackets and ties, showing off the impressive new black and blue designs.

The band has been celebrating our 80th anniversary with two new concerts held in the spring and autumn, plus a spectacular evening with the Lewes Borough Bonfire Society all to raise money for the uniform replacement project.

In addition, we were grateful to receive a grant from Godalming Town Council, and contributions from Councillors Peter Martin and Penny Rivers, local councillors at Surrey County Council. With these contributions arriving in the past month, the new uniforms were able to be completed in time for the Christmas concert.

After the concert, Dominic Cleal said:

“It was an exciting and proud moment to see the band assemble and walk out in this new set of uniforms, looking very smart and well-fitted. We couldn’t have achieved it without the perseverance of our band members and the support from our supporters and council members in the local community.”

The uniforms used by the band have varied through the years, starting off with double-breasted, brass-buttoned Navy uniforms, and often featuring red piping or lapels throughout the years. The blue uniforms that the band are known for today originated in 1979 and were last refreshed in 1995 to coincide with the opening of the band room at Broadwater Park.

The new uniforms include a smart black concert jacket with blue lapels and gold embroidering, and a brand new tie with the Godalming Band crest featured in the centre of a blue and gold diagonal stripe. The uniform for the band’s prize-winning percussion section adds a new black waistcoat.

Godalming Band and Youth Band’s Christmas concert was a packed evening featuring over twenty pieces and many renditions of traditional carols in both works for the band and for the audience to sing along to. It comes towards the end of the carol season for the bands, as both the youth and senior bands have been out playing carols in villages, and visiting retirement homes and day centres around Godalming, Cranleigh and Guildford.