In an entertaining evening at Godalming Music Festival this year, our own Godalming Youth Band were delighted to top all three classes they entered and won a collection of silverware. 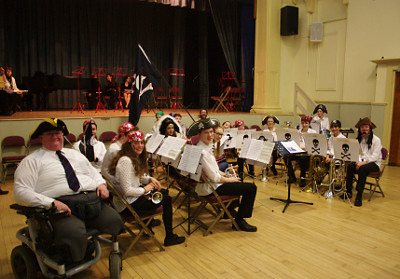 With fifteen members from age seven upwards, and bolstered by two new recruits this year, the band under Musical Director David Loftus MBE played a range of ambitious and entertaining music for the audience at Godalming Borough Hall on Thursday 3rd March.

“I believe that is the best set of results we have ever obtained and the band did themselves proud. The attention to detail and concentration resulted in such a great band and an excellent evening.” - David Loftus.

In the “Band Open” class, the band played St. Andrew’s Variations, a technically challenging piece as it features eight movements in very different styles with a common motif. This earned them 88 points, and first place to win the Jericho Cup.

Next, and against stiff competition from a range of bands from local schools, the Youth Band entered the Large Ensemble (up to Year 13) class with Three Dance Movements – a combination of jazz and dance pieces. Again earning 88 points, the win had special meaning for the band as they won and took home the John Boot Trophy, named after the former Godalming Band trombonist.

It was the highlight of the evening, with the band being awarded 90 points from adjudicator Gillian Johnston, who commented on the band making it a true entertainment contest, and highly enjoyable for the audience.

Individual members of the Youth Band have also been participating in the Godalming Music Festival throughout the week, and not always on brass instruments! Four of the band entered solo classes and achieved a mix of high placements and wins.

The band will next be performing at the Godalming Spring Fair held at the Burys Field in Godalming on Saturday 30th April, and at the Farncombe Day Centre Fair on Saturday 18th June.

The Godalming Youth Band is always open for young musicians to join, whether looking to learn a new brass instrument through lessons and group playing, or for existing brass players. The band also plan to hold sessions at the bandstand in August for anybody wishing to come and try an instrument.