It all began at 4am on Friday, outside our band room in Godalming. There weren’t many bright-eyed and awake members of the band at that point, and we all settled down for what would be a long, 13 hour coach trip to Joigny. Delays at Folkstone for the Channel Tunnel put us behind schedule by a couple of hours, but we eventually arrived in one piece at the Hotel de Ville, Joigny.

An evening meal and entertainment had been laid on, featuring A Ti à Taille, a bagpipes and percussion group. This was followed by an evening concert given by Carlo Rizzo, a talented tambourine percussionist.

The following morning, the bands got together for a joint rehearsal before Godalming went out for our first concert of the weekend. We set up outside of the Joigny market, which was busy at mid-morning and played for an hour to a growing audience. 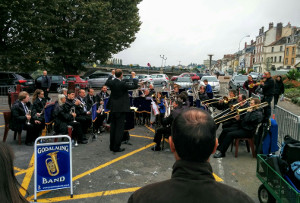 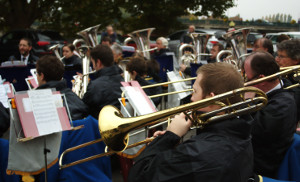 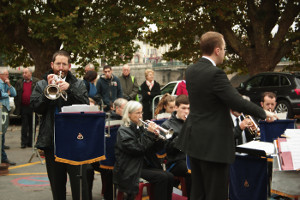 Our numbers were bolstered on this trip to Joigny by a group of eight excellent players from our very own Youth Band, who played in almost every section. Many thanks to them all!

The Saturday afternoon took an interesting turn when the band joined in with an improvisation session - we’re only used to reading sheet music and being reminded to follow all of the annotations!

Named Soundpainting, a conductor directed the massed bands of Godalming and Mayen to play a note of their choice at a certain pitch, volume and other characteristics. As the bands played, the director gave further hand movements to bring sections in or cut off notes, to play sudden accents, or to play rhythms. 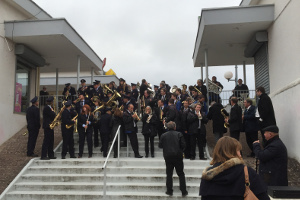 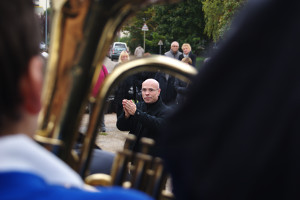 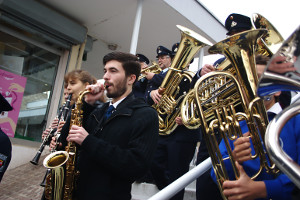 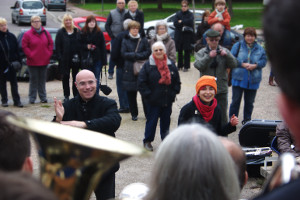 As evening approached, the official 150th anniversary ceremony for Harmonie de Joigny began outside the Hotel de Ville. Godalming Band presented Harmonie de Joigny with a celebratory plate, to be awarded to band members in future, while Godalming Town Council gave a gift of a painting to the town of Joigny. 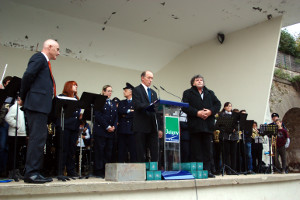 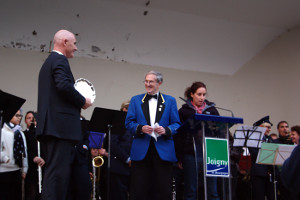 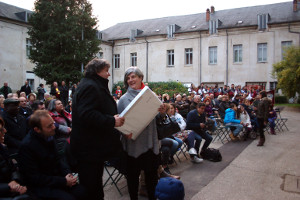 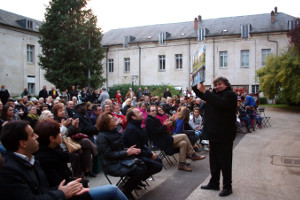 The ceremony was rounded off with three massed band performances, one under each band’s musical director. 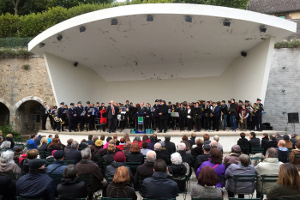 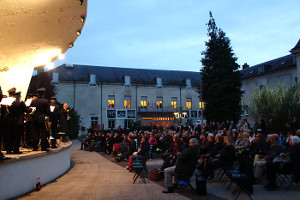 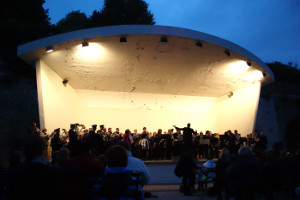 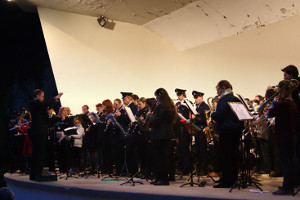 Saturday night hosted a lively dinner inside the Hotel de Ville, with each of the four bands providing dance music throughout the evening. After the main course, Godalming Band took to the stage and started with Music, which tested the dancers with its 7/8 time signature, and went on to play a variety of traditional pieces to a lively dance floor in front.

There are some photos of band members from later that evening, but for the sake of their reputations, they have been withheld…

Not-too-early the next morning, the bands reconvened next to the (very wide!) river Yonne for a Dawn Serenade. Bands from Godalming and Mayen stayed on the market side of the river, while bands from Joigny and Erlangen waited on the far side. The bands played passages from Andro and Passerue de Montpellier across the river, calling and responding to each other. 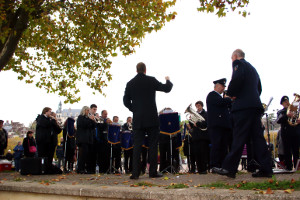 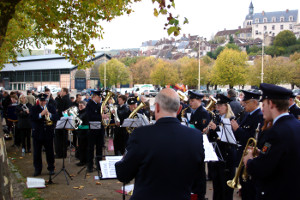 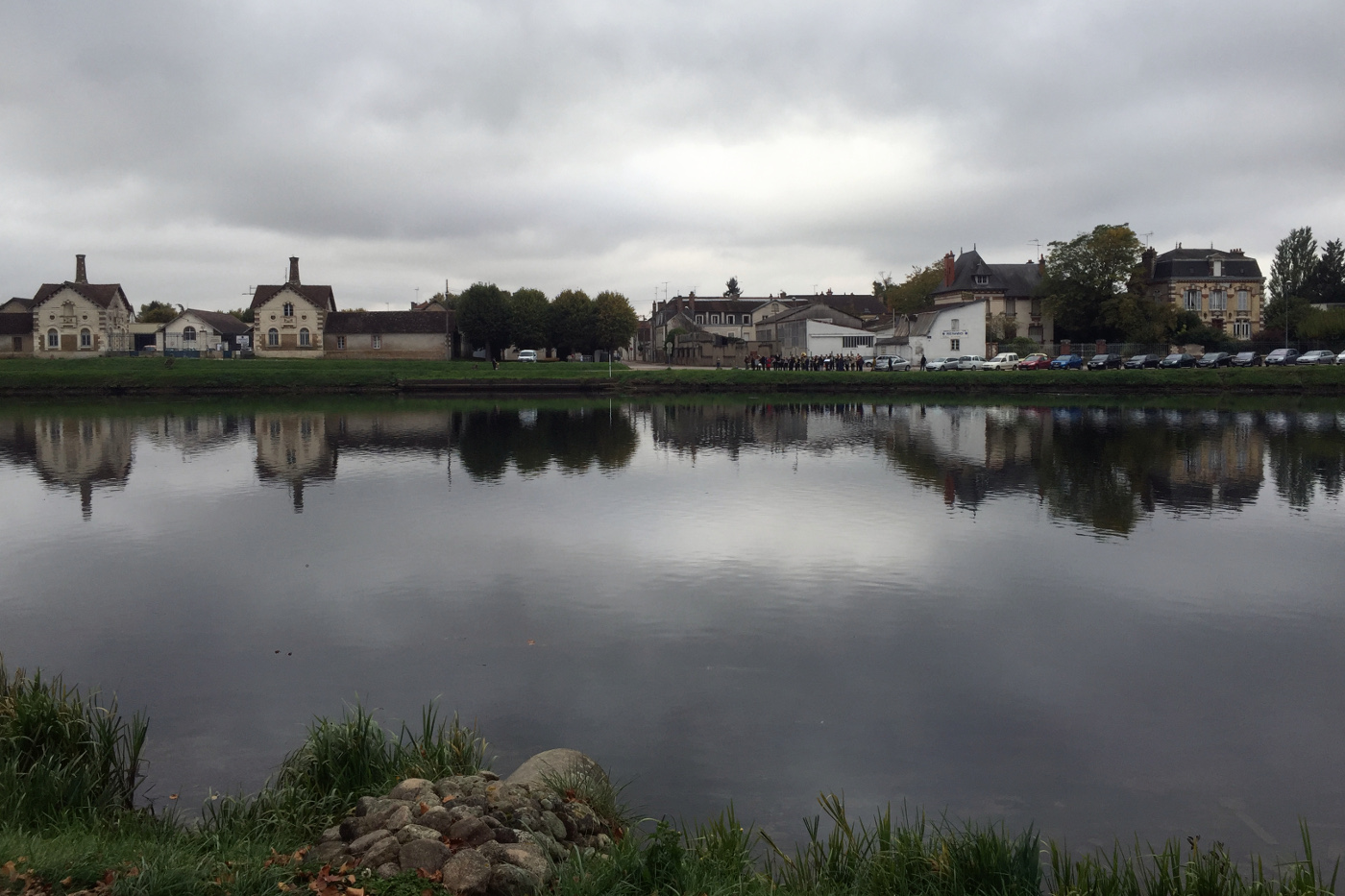 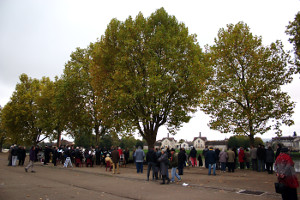 The Joigny and Erlangen bands came back over river to join forces for a few more massed band items, held outside the Joigny market hosting the local wine festival. The Italian flag-throwing group from Amelia put on an impressive performance outside the market after the bands had played. 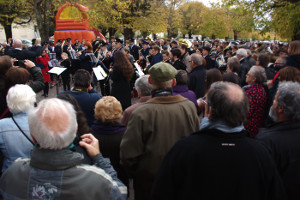 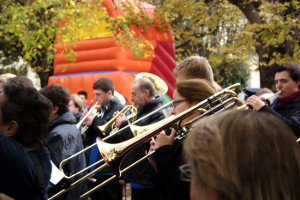 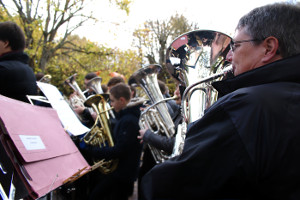 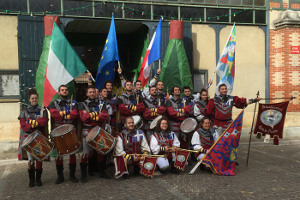 The weekend drew to a close on Sunday evening, with a combined concert from the three visiting bands, held back in packed hall of the the Hotel de Ville. Godalming Band opened the concert with the dramatic piece Also Sprach Zarathustra by Strauss, which you can listen to on the link below:

To close the concert, the three bands and players from Harmonie de Joigny joined again for one last fun piece, Bare Necessities on the main stage:

The band, just before the concert:

Thank you to the kind families in Joigny who gave us hospitality for the trip - we hope to have made new friends for years to come, and that this strengthens the link between the towns.

The trip wouldn’t have taken place without a great deal of organisation from our own band chairman, Ray Pont, and his counterparts in Joigny, Mayen, Erlangen and Amelia. Thanks to their enormous efforts, the band had a very enjoyable and memorable trip.