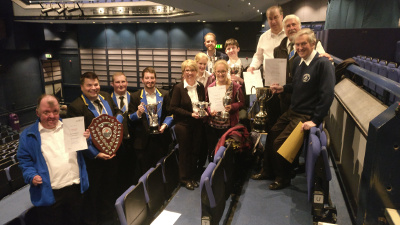 This weekend saw Godalming Band achieve a fantastic result, coming away with 1st Place, “Band of the Year”, and a clutch of prizes in the new morning competition at the scaba Autumn Contest, against an enlarged field of bands across four sections.

A win at the scaba Spring Contest earlier this year had put Godalming into contention for the prestigious title of “Band of the Year” going into the weekend. The second win sealed the 2018 title for Godalming, and Musical Director James Haigh was delighted to collect the trophy for the band.

“Winning scaba ‘Band of the Year’ for 2018 is a great follow up to our 80th Anniversary last year and shows how consistent the band has become. The commitment and talent of this local group of musicians is fantastic. I couldn’t be happier.” - James Haigh, Musical Director

The band’s chairman, Raymond Pont, added that this was “a truly proud and historic moment in the band’s history” and that it was “a reward for all of the hard work put in throughout the year” by the band and James Haigh.

Godalming chose to play Paul Lovatt-Cooper’s Vitae Aeternum (“Eternal Life”), a piece of three parts with a lively and exciting beginning, a tranquil and lyrical middle section featuring a cornet chorale and beautiful flugelhorn solo, then finishing with an energetic buildup. This performance won the band first place in the morning “B” section, prizes for conductor James Haigh, baritone player Sam Honeysett, plus three more prizes for the trombone, bass, and percussion sections.