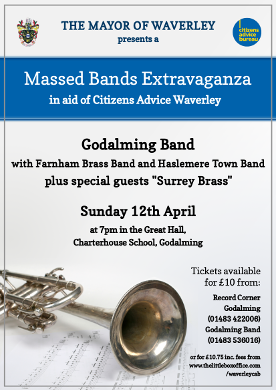 Update: the evening was a spectacular success with 250 supporters raising over £3,500 for Waverley CAB. See some photos of the bands rehearsing in our gallery.

Join us, the Mayor of Waverley and a range of special guests for a charity massed bands concert in aid of the Citizen’s Advice Bureau this April. We’ll be joined by local friends the Farnham Brass Band and Haslemere Town Band to form a massed band, in addition to the wonderful “Surrey Brass” ensemble. A wide selection of music will be played, ranging from popular well known tunes through to light classical pieces - music to suit all tastes.

The Mayor of Waverley, Cllr Liz Wheatley has organised the concert as part of her fundraising effort for the CAB in the Waverley area during her term of office. All of the proceeds from the concert will be made available via the Mayor’s fund for Waverley CAB, who help with all aspects of problems by providing free, independent and confidential advice and help, while relying almost entirely on grants, lottery funds and local fundraising to keep their vital work going.

The concert will be held at the Great Hall, Charterhouse School, Godalming at 7pm on Sunday 12th April. Doors open at 6.30pm.

Tickets are available for £10 from the following local retailers:

Or from the bands:

Or online from The Little Box Office for £10.75 including fees.